A Higher Freedom: David Brooks on the Power of Christian Institutions 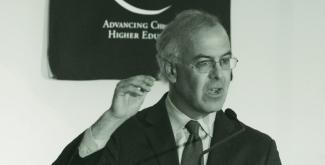 We continue to see the expansion of freedom and economic prosperity around the world. Yet despite having enjoyed such freedom for centuries, the West is now stuck in a crisis of moral imagination.

For all of its blessings, modernity has led many of us to pair our comfort and prosperity with a secular, naturalistic ethos, relishing in our own strength and designs, and trusting in the power of reason to drive our ethics. The result is a uniquely moralistic moral vacuum, a “liberal paradox,” as Gaylen Byker calls it: “a hunger for meaning and values in an age of freedom and plenty.”

In the past, American prosperity has been buoyed by the strength of its institutions: religious, civil, economic, political, and otherwise. But as writers such as Yuval Levin and Charles Murray have aptly outlined, the religious and institutional vibrancy that Alexis de Tocqueville once hailed is dwindling, making the space between individual and state increasingly thin.

The revival and restoration of religious and civic life is essential if we hope to build a free and virtuous society, occurring across spheres and sectors, from the family to business, from the church to political institutions. But given the increasing attacks on religious liberty, Christian colleges and universities are standing particularly tall, even as they endure some of the highest heat.

In a recent talk for the Council for Christian Colleges and Universities, David Brooks demonstrates the cultural importance of retaining that liberty, explaining how his recent experiences with Christian educational institutions have affirmed their role in weaving (or re-weaving) the fabric of American life. (Read his full remarks here.)

For Brooks, who teaches at Yale University, the students he typically encounters in secular academia are languishing due to a lack of moral vocabulary. They are coming from a vacuum of moral imagination, and they are entering a sphere that, quite often, is not much richer.

As Brooks explains, many of today’s young people simply have no context for transcendence:

[The students] have not been provided with a moral vocabulary, so the only vocabulary they have is a utilitarian one. They use economic concepts like “opportunity cost” in an attempt to understand their lives. They have not been taught words like “grace,” “sin,” “redemption” and “virtue” that would enable them to get a handhold on what’s going on inside.

They assume that the culture of expressive individualism is the eternal order of the universe and that meaning comes from being authentic to self. They have a combination of academic and career competitiveness and a lack of a moral and romantic vocabulary that has created a culture that is professional and not poetic, pragmatic and not romantic. The head is large, and the heart and soul are backstage.

For distinctly Christian institutions, however, these questions remain at the center. “You guys are the avant-garde of 21st century culture,” Brooks says, speaking to a room of Christian educators. “You have what everybody else is desperate to have: a way of talking about and educating the human person in a way that integrates faith, emotion and intellect.”

What the world craves continues to be the light that faithful churches and institutions are holding. Bellies and storehouses may be presently packed with material prosperity, but the hunger for virtue and character persists, and the fruits of the former are only possible if we water the roots of the latter.

The popularity or cultural acceptance of institutions that supply these answers may be dwindling, but as cultural pressure increases, the Gospel may in fact get more visibility. As the wheat separates from the chaff, the distinct witness of the church is likely to grow more compelling. As Brooks notes, the Gospel, when applied, offers more than enough meat to satisfy, whether at an educational institution or in other spheres of society:

Many of our institutions, and especially our universities, don’t do much to help our graduates achieve that transcendence. But for Christian universities and other religious institutions, this is bread and butter. This is the curriculum. This is the chapel service. This is the conversation students are having late at night. It’s lived out. Now, you in this room, have the Gospel. You have the example of Jesus Christ. You have the beatitudes; the fire of the Holy Spirit; you believe in a personal God who is still redeeming the world.

As Pope Francis demonstrated, when a single person acts like Jesus, the whole world is transfixed. Carrying the Gospel is your central mission to your students and to those you serve beyond the campus walls, but that’s not all you have. You have a way of being that is not all about self. You have a counterculture to the excessive individualism of our age. You offer an ideal more fulfilling and more true and higher than the ideal of individual autonomy…

For most of us, our inner nature is formed by that kind of covenant in which the good of the relationship takes place and precedence over the good of the individual. For all of us, religious or secular, life doesn’t come from how well you keep your options open but how well you close them off and realize a higher freedom.

Brooks offers a strong portrait of but one source of such witness (the university), and it serves as a helpful prod for how we ought to pursue such renewal across other spheres. Without a renewed moral imagination and a transcendent philosophy of love and life, the West will continue to crave meaning and values, regardless of its political freedoms or economic status.

God calls us to a higher freedom than the individualism of this age. It is up to each of us to be the moral witness of such freedom, in our families, churches, schools, businesses, and communities. As we continue to fight for the political and religious liberty that makes such flourishing possible, we can continue building and rebuilding right where we are.

Originally published at the Acton PowerBlog