The Joyful Seriousness of Christmas 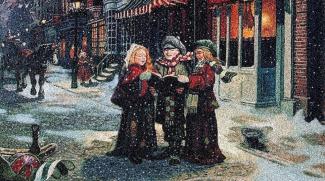 As Christians living in a secular age, there’s a temptation to use Christmas as a wedge to wage epic new battles to restore Christendom. But despite the flurry of hackneyed “War on Christmas” tropes, there is, alas, something rather amiss.

Though the battlefront may not be a petty replacement of “Merry Christmas” with “happy holidays,” society is obviously devoid of a true understanding of the season, diluting a celebration about the invasion of heaven on earth into a shallow idolatry of tradition for tradition’s sake.

Yet as Andrew Ferguson reminds us, despite its best efforts and its strongest impulses and appetites, culture cannot, and indeed, doesn’t want to escape the “true meaning of Christmas.” In many ways, Ferguson writes, alluding to G.K. Chesterton’s famous words, it’s impossible to live in a post-Christian age:

Some things can’t be undone, and chief among them is the Light that was lit the first Christmas morning, while choirs of angels sang above,” Ferguson writes. “It can be ridiculed and parodied, satirized and scoffed at, obscured and sentimentalized, but it won’t be extinguished. So even a secular age continues to go through the motions, singing the same songs, sometimes the old songs, without quite knowing why.

And those songs — they bring such revelation and power, wherever they find a welcome set of lungs. (Yes, wherever.)

It is with Christmas music, Ferguson argues, that we see the Christian witness endure at its finest, not via an antagonism of tacky cultural kitsch, but through an elevation of the true and serious joy of Christ:

A good carol, said the great musicologist Percy Deamer, “was witness to the spirit of a more spontaneous and undoubting faith.” The effusions were organic, growing from the bottom up, and like the Gospels themselves, filled with metaphors taken from field and hearth…

…To take life”—and hence Christmas—”with real seriousness is to take it joyfully,” Deamer went on. “For seriousness is only sad when it is superficial: the carol is thus nearer to the truth because it is jolly.” The opposite isn’t necessarily true, by the way. “All I Want for Christmas Is You” [by Mariah Carey] might be described as jolly; no one would describe it as serious. “Joy to the World,” on the other hand, is both. A Christmas carol is meant to liberate us from phony seriousness and phony good cheer.

In the past that lesson has often been lost, at times even more thoroughly than in our own day—a reminder that should cheer us up, if you’ll forgive the expression. The serious joy, or the joyful seriousness, of Christmas is offensive to the grim Christian.

Carols offer a profound example of cultural engagement done right, shining a blinding light that, by virtue of its truth, goodness, and beauty, welcomes a lost world even as it wages war against hell.

Thus, as we worship and magnify Jesus this Christmas season, let us avoid petty battles against petty gods, whether of blind consumerism or nostalgic knick-knackery. Instead, let us exude and share the serious joy that comes from being a child of the living God. Let us simply sing, and sing of Jesus.

And let earth receive her King.

Originally published at the Acton PowerBlog