Of Coins, Sheep, and Men: The Work and Prayer of Finding the Lost 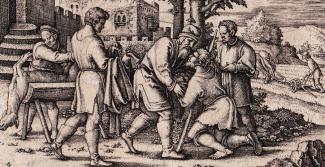 One of the most famous stories from the Bible is that of “The Prodigal Son,” a tale that has resonated with parents across times and cultures. The basic plot of the story is straightforward: a rebellious youth sets off from home in search of worldly pleasures, and having wasted his father’s money and reputation, eventually returns home in humility to a joyful welcome. Biblical commentators usually note that the parable appears in connection with two other stories in Luke 15 — those of “The Lost Coin” and “The Lost Sheep.”

The similarities in the stories are, in fact, quite striking, and as biblical scholars note, well worth attending to. But amid the important similarities of the stories, there are also significant differences that provide some important insights into the biblical vision of human stewardship, particularly our interaction with the material world, animal life, and other people.

So the stories should be read together, and understood as Jesus’ answers to the complaint of the Pharisees that he “welcomes sinners and eats with them” (Luke 15:2). In each story the one who has lost something is understood as filling the role of God, who has “lost” something dear to him. The sheep, the coin, and the son represent God’s people who have gone astray. These lost ones are the “sinners” whom Jesus welcomes. While those who lose things in these stories primarily represent God, the actions of these characters also shed light on how human beings are to conduct themselves as God’s image-bearers.

In one story (which actually is the second parable of the three), Jesus describes a case in which a woman loses one of her ten silver coins. She takes quick action, lighting a lamp, sweeping the house and searching “carefully until she finds it” (Luke 15:8). In this case, that which is lost is a “coin,” a Greek drachma worth about one day’s wages. The woman is the one who “loses” the coin. There is no sense of agency imparted to the coin in this story; the coin, as a material object, is impersonal and inanimate. The coin is passive, receiving the action of the story. The woman loses the coin, lights a lamp, sweeps the house, searches carefully and finds the coin; the coin is lost and found.

In another story (which Jesus tells first), a shepherd “has a hundred sheep and loses one of them” (Luke 15:4). Again we see the focus of the action on the shepherd (whom Jesus identifies directly with his listeners: “Suppose one of you has a hundred sheep…”). The sheep presumably wandered off, but it is after all only an animal, and so is impersonal. Even though animals are to be understood as active in some sense, it is an impersonal sense of agency, so that the action is ultimately attributed to the shepherd. The shepherd loses one of the sheep, leaves the ninety-nine, goes after the lost sheep, finds it, and puts it on his shoulders and goes home.

But the final story, that of the Prodigal Son (or even better to draw the connection with the other stories, “The Lost Son”), is much more complex than the other two. There are more characters. The action is dispersed in the sense that agency is not simply attributed to the one who has lost something. In fact, in contrast to the other two stories, the one who drives the action in the story is the son rather than the father. Whereas the woman loses the coin and the shepherd loses the sheep, in this final story the son “got together all he had, set off for a distant country and there squandered his wealth in wild living” (Luke 15:13). To be sure, the son is lost to the father. But the focus here is on the personal agency of the son rather than that of the father.

We can imagine what this would have been like for the father. We can assume that he raised his son up in the fear of the Lord, that he trained his child “in the way he should go,” with the hope that “when he is old he will not turn from it” (Proverbs 22:6). But when his son demands his inheritance and leaves home, the father seems to do nothing. He neither refuses to give his son what he asks nor prevents him from leaving. The text does not say so explicitly, but we can again presume that while the son is out in the world living wildly, the father is at home, attending to his household, and praying diligently for the son to return. We know the father has this hope because once the son decides to return home, “while he was still a long way off, his father saw him and was filled with compassion for him” (Luke 15:20). Once the son takes the initiative (getting up and going to his father), the father finally has some sense of agency: he runs to the son, embraces him, kisses him, and orders a celebration.

The contrast between the story of the Lost Son and the parables of the Lost Sheep and Lost Coin are striking on this level. In the case of human relationship to material objects, like coins, and impersonal agents, like animals, the stories account the moral agency completely to the human actors in the story. The woman and the shepherd lose their possessions and work diligently to find them again. But when the story involves human interrelations, there is an emphasis on the moral agency of every person in the story (including the elder son, who is often overlooked and cannot be treated adequately here). The father definitely loses his son, but his diligence in finding him again is limited to means other than actively working to find him; he must instead diligently pray and watch.

Reading these three stories together teaches us many things about the nature of God’s love for us, such that when we were lost, “While we were still sinners, Christ died for us” (Romans 5:8). But the stories also provide models for how we should relate to the different aspects of God’s created order, from the material, to the animal, to the human. In each kind of relationship, humans have a definite role to play. In some cases we are called to work actively to achieve God’s purposes in the world. In other cases, out of respect for human freedom and individual sovereignty, we have to engage in active searching for the lost things of this world by less direct means.

In a short essay on the relationship between work and prayer, C. S. Lewis points to the remarkable continuity between the two, and how prayer is in its own way an appropriate form of active searching. As Lewis writes of work and prayer, God “gave us small creatures the dignity of being able to contribute to the course of events in two different ways.” With respect to primarily material reality, like coins and sheep, we can work, or “do things to it; that is why we can wash our own hands and feed or murder our fellow creatures.” But with respect to spiritual realities, we exercise a different kind of creaturely causality, that of prayer, whose results are not always as predictable as in the physical order: “This is not because prayer is a weaker kind of causality, but because it is a stronger kind. When it ‘works’ at all it works unlimited by space and time.”

In these parables of lost coins, sheep, and men, we see modeled in broad strokes the array of human causality, from work to prayer. These are, in fact, the two basic ways that God has instituted to accomplish his purposes in the world through human beings. In these stories, we find that the work and prayer of finding the lost things of the world are foundational for what it means to be a steward, an image-bearer, of God.