The Great Exchange of the Magi 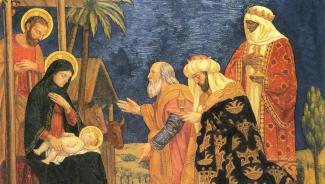 On the Nativity of Jesus Christ, Christians celebrate the birth of the Son of God incarnate to a poor, socially-disgraced couple, in the coldness of a cave, the place of the Christmas manger according to ancient tradition. St. Gregory the Theologian, preaching in the fourth century, describes the mystery this way, “He who gives riches becomes poor, for he assumes the poverty of my flesh, that I may assume the richness of his Godhead.” In the familiar story of Christmas, poverty — both spiritual and material — sits at the center, and in the story of the Magi from the East, we see the centrality of the spiritual discipline of almsgiving both in the Christian life and for the life of the world.

When Jesus was presented at the temple, Joseph and Mary “offer a sacrifice according to what is said in the law of the Lord, ‘A pair of turtledoves or two young pigeons’” (Luke 2:24). This, however, was a concession in the law for the poor, who could not afford to offer a lamb (see Leviticus 12). Thus, poverty characterized the life of the human family God chose to make his own. The God who promises through the incarnation to “bring justice to the poor” (Psalm 72:4), and who came “to preach the gospel to the poor” (Isaiah 61:1), begins his mission among us by himself becoming poor.

When the “wise men from the East” divined from the stars that a king had been born in Israel, they traveled great lengths “to worship him” (Matthew 2:1-2). Following a bright light in the heavens, they came to the house in which the holy family dwelt.

Whether we call them kings, magi, or wise men, the fact is clear that by material standards they were wealthy. Yet, they valued heavenly reward far above their own treasures, and coming to God incarnate as a little child, they gave alms to him who owns the universe.

The magi set forth an example of the heart that all of us need to have when it comes to stewardship of our material blessings. They knew their own poverty of spirit, and gladly gave the riches of this life for the blessing of eternity: worship. Their almsgiving, then, had a particular attitude attached to it. They did not see the holy family as mere victims of an unjust world, but as persons worthy of their investment, the Child whom they worshiped most of all.

Specifically human actions or behavior in conformity with the grace of God … must evidently express the normal relation of a person to God, to people, and to one’s own material nature, corresponding to the three general bases of morality: piety, pity, and shame. The first concentrated, active expression of religious sentiment, or piety, its work, is principally prayer; pity has just such work in alms; and the work of shame — is abstinence, or fasting. The beginning and the development of a new life of grace in a human being are conditioned by these three works.

As Soloviev notes, almsgiving is one of three basic Christian spiritual disciplines. These receive a clear emphasis in Jesus’s Sermon on the Mount (see Matthew 6), underlining them as normative practices of the Christian life. And it is specifically almsgiving that has the most obvious social orientation.

While there is no indication of the magi fasting, we see, at least, that their almsgiving was motivated by a deep piety, however imperfect their understanding may have been. The star that they followed was God’s gracious call to them to “the development of a new life of grace,” and they responded precisely as Soloviev claims we all ought to do.

As we all, like the wise men, approach the Christ Child this Christmas, let us not be found empty handed. We gather around the tree in our homes to give gifts to friends and family this time of year; we ought also to remember the materially poor among us. “For you know the grace of our Lord Jesus Christ,” writes St. Paul, “that though he was rich, yet for your sakes He became poor, that you through his poverty might become rich” (2 Corinthians 8:9). The material wealth we enjoy is a gift of God but a gift that God expects us to invest in the poor, just as Jesus Christ invested the riches of his divinity in us.

In our giving to meet the material needs of others, in whatever charitable work we do for the common good — from giving to organizations like Toys for Tots to lending one’s time and resources to help the downtrodden get back on their feet — Christ meets our spiritual needs, giving alms of grace to the poor in spirit for the kingdom of God.

One hymn of the Christian East highlights this mysterious exchange:

Your Nativity, O Christ our God,
Has shone to the world the Light of wisdom!
For by it, those who worshipped the stars,
Were taught by a Star to adore You,
The Sun of Righteousness,
And to know You, the Orient from on High.
O Lord, glory to You!

In responding to God’s gracious call by worshipping the King of Kings and offering alms to the needy, the kings of the East received a newfound faith, which according to St. Peter is “much more precious than gold” (1 Peter 1:7) and, for that matter, frankincense and myrrh.

The descent of God to us in Christ at Christmas, in the most humble setting, ought to remind us of our own spiritual poverty and the gracious giving that ought to characterize not only this season but the whole of our lives as well.