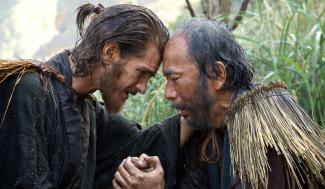 In the coming weeks, a film speculated by many to be Martin Scorsese’s most personal and poignant project to date will release throughout the United States.

Silence, based on a 1966 novel of the same name by Japanese Catholic novelist Shusaku Endo, follows two Portuguese Jesuit priests as they journey to 17th century Japan. Their task is to inquire after the fate of Cristovao Ferreira – their former teacher and mentor – who is thought to have abandoned his faith under intense persecution. Unsatisfied with the vague accounts emanating from Japan, the priests propose their own mission east. After earning their superior’s reluctant permission, they set out for Japan in hopes of learning the truth about their teacher – a holy man who would surely choose honorable martyrdom over selfish apostasy. The men endure great tribulation on their quest, inviting us to consider fundamental questions about the nature of faith, the reality of suffering, and the presence of God in the anguish of this world.

Scorsese encountered the novel decades ago, and was so taken by its themes that he resolved to cinematize it someday. A lapsed Catholic, Scorsese spoke in 2013 about his interest in the project: “The very nature of secularism right now is really fascinating to me, but at the same time do you wipe away what could be more enriching to your life, which is an appreciation of some sort of search for that which is spiritual and transcends? … [Silence] has been an obsession; it has to be done and now is the time to do it. It’s a strong, wonderful true story, a thriller in a way, but it deals with those questions.” Scorsese and his cast reportedly took a pay cut to make the movie happen.

While Silence depicts a Japan deeply resistant to Christian influence, the story actually begins approximately 100 years earlier, when Christianity was not only tolerated, but encouraged.

The Christian faith reached Japan’s shores in 1549, when Francis Xavier, co-founder of the Jesuit order and one of the church’s most prolific missionaries, made landfall. As superior of the mission in Goa, India, Francis had heard a great deal about Japan. He concluded that the Japanese were an educated, industrious, and reasonable people, and so particularly ripe for the Gospel message.

While Francis would die only years later, his early efforts bore great fruit. The Jesuits showed great political savvy, leveraging a decentralized and fragmented Japan to target those feudal domains most receptive to their faith. When domain lords underwent conversion, thousands of their citizens would often follow suit, adding quickly to Christianity’s numbers and standing. In some areas, Christianity so permeated the culture that it became fashionable to be baptized and wear rosaries. Christians are thought to have numbered anywhere from 300,000 to 750,000 in the early 17th century—numbers utterly astounding in a country that had encountered Christ just decades prior.

What was Christianity’s allure? Faith, of course, but also economics. Many of those in positions of authority tended to embrace (or allow) the faith because doing so secured trade with Portugal. Some of that country’s primary exports – guns and cannon – held particular appeal at a time characterized by conflict and uncertainty. The scholar John Dougill writes, “It’s been said that whereas the missionaries used trade to get the Japanese to heaven, the Japanese used heaven as a way to get trade. From the very outset, the fate of the mission was tied to a masthead.”

Many peasants, however, saw in Christianity a unique emphasis on intrinsic human dignity and equality. Endo hints at this in Silence. One of the priests reflects in a letter:

Despite its early success, Christianity gradually became unwelcome, then punishable. This decline was partially a result of theological dissonance; for reasons too complex to cover here, Christian notions of hell, divine transcendence, and the exclusivity of Christ were difficult for the Japanese mind to adopt. More consequentially, Japanese leaders’ suspicions were roused by political concerns. Western priests were accused of instructing their flocks to obey God over their leaders. And in 1596, a Spanish pilot whose crew had been detained and ship seized, sputtered in frustration: “The missionaries come as the king of Spain’s advance guard!” He was referring to the Franciscans, who with Spanish patronage had arrived in Japan by this time. Such recklessness only affirmed Japanese fears and concerns.

Growing tension resulted in the Edict of Expulsion in 1614. It declared that “the Christian band have come to Japan…that they may change the government of the country, and obtain possession of the land. This is the germ of a great disaster, and must be crushed.” All missionaries were to leave and Christianity was banned. The alien faith went underground, resulting in communities of kakure kirishitan, or hidden Christians, throughout the country. The law was rigorously enforced.

This is where Silence picks up.

Whether you read the book or see the film, prepare yourself for close encounters with grief, guilt, torment, and death. The righteous appear to falter, while the merciless endlessly prevail. But as the characters in Silence almost accidentally teach us, perhaps it’s in that very crucible – that silence – where God speaks most audibly.