Keeping Watch over Their Flock at Night 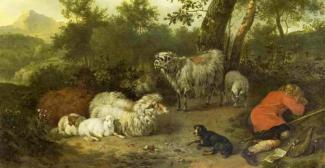 “And there were shepherds in the fields nearby keeping watch over their flock at night.” Luke 2:8

If we should ever be envious, shouldn’t we envy the shepherds out in Bethlehem’s fields? Those men singled out for their exceptionally glorious privilege! The ones awestruck on that holy night by the flood of heavenly glory that no one else had ever seen! Those who saw God’s heavenly hosts swooping and glistening above the fields! The men whose ears were ringing with the resounding angelic anthem “Glory Be to God in the highest!”  The shepherds who then made their way to Bethlehem and saw for themselves “the little baby wrapped in swaddling clothes and lying in a manger,” basking in Mary’s motherly gaze! Shouldn’t we envy them?

That’s the way our imaginations work about those shepheds! From the time of our youth, that’s the way that little band has struck us as they huddled down or half reclined on the sloping hillside with their white-wool sheep and their even whiter lambs still grazing or bedded down around them.

And when we think of how the silver moonlight bathed the whole scene just before it was completely overwhelmed by the glory of the Lord, there’s hardly anything more beautiful or inspiring than the thought of those shepherds keeping watch at night over their precious flock outside Bethlehem’s gate.

But is that where we should leave matters? That they inspire us so that we envy them? Is that it? Don’t they speak a word to our souls? A serious word? A word of warning?

Think about this: there are many others who are shepherds too, even though they may not tend actual sheep on the green grass of an actual field. The person tending real sheep is not the greatest shepherd. The Shepherd of all shepherds is the Lord, the great Shepherd of our souls. That’s the first thing to say about this full, rich, prophecy-fulfilling notion of shepherds.  He, our own Lord Jesus, is the Great Shepherd—he alone.

And because he is the Shepherd, the shepherd metaphor works so well here on earth. It does so in two ways. It does so in part when a person actually guides a herd of cattle or a flock of sheep into green pastures. But in a much higher sense, it also works when the Lord God so arranges things that a given person is assigned to be the shepherd of a “flock” of people.

Who qualifies as a shepherd over a flock of people?

Aren’t the king and governing authorities “shepherds of the people?” Aren’t ministers of the Word also “shepherds of the church?” Aren’t fathers and mothers “shepherds of their children and their entire family?” Look, aren’t all those who are vested with authority over other people “shepherds?”  This includes leaders over hundreds, managers of organizations, people with responsibility for the needy, teachers in all schools, and even those who lead the huge flock of human society by their influence, example, or directives.

To all of these it can be said, “You are the shepherd of those entrusted to you; they are your flock!” And there, in Bethlehem’s night, the all-knowing God comes to all of us asking whether it can really be said of us, “And they were watching over their flock at night!”

The shepherd keeps watch at night out of concern for his profit-margin. If he didn’t, some wolf would snatch his lambs. So, he better do so. He needs to keep bread on the table. His sheep live on grass, but he lives off his sheep.

The little band in Bethlehem’s fields is picturesque and inspiring. But in itself that image conveys no great moral truth.

Don’t think now about the king, who will have to give account to God. Don’t think about the minister of the Word, who is answerable to the One who sent him. Think only about your own situation. Think about your shepherding. Think about the flock entrusted to you.  Think about your own responsibility to keep watch over that flock at night. What does your conscience say to you about that? The year is coming to a close. Days are flying by. Give an account of yourself; hold a reckoning of your own soul. Brothers and sisters, what, I ask what, have you done with your flock? What have you done with those about whom the Lord said to you, “I entrust these to you!”

So, tell me then, how do things stand with you on that matter? Are you keeping watch at night?

“Keeping watch at night,” as you well know, does not mean that you sit alongside the little bed of a darling child when he or she is sick. You could do that night after night and the wolf could still drag your little lamb off. No, the real night is life lived without light. The circle of people who live in the light of God’s grace and on whom his face shines lives in the daylight. By contrast, night is the darkness of sin, the bleakness of a world without redemption.  That’s the world your children have to live in. That’s where they stand naked, confronting a double danger. That’s where this world’s darkness poses a twofold threat to their tender souls. The day-watch over your children is the light shining around you in your home, where they are safe. But the night-watch over your children is that heavy-hearted responsibility you have when dangers encroach and bleakness descends when suddenly they are out of your house.

That’s why I say that sometimes there can be a mother who sits up all night a week at a time beside the bed of a dearly loved, sick child who never “keeps watch at night.” She simply loses sight of her little treasure when they are out the door, where the blackness of sin descends on them and soul-snatching wolves slink around to carry them off. But the real kind of “keeping watch over your flock at night” requires dedication.  “A good shepherd,” says Jesus, “lays down his life for his sheep.” Most people understand this to mean rushing in to fend off the wolf the moment it attacks the sheep. But they forget that this requires that at the moment of attack you have to be there with the sheep. Always! You have to organize your life around your flock. You have to dedicate your life to your flock. Sitting up with your child for two or three nights is asking a lot. But it passes, and that night-watch is over.  But the night-watch over your children that we’re talking about here is on-going, because your children always go about their lives in the night of sin. That’s why they are always in danger. And that’s also exactly why “keeping watch in the night” of sin is so exhausting.

How terrible—truly terrible—when parents are guilty of neglecting their care in this regard. Time and again a person encounters flocks in the night of sin that are left without a shepherd and have to find their own way. Their shepherd is relaxing in the daylight, thinking, “God will certainly take care of my youngsters!” Who, who can count the lambs that have been snatched and dragged off because a mother’s eyes were shut and a father was indifferent to “sin’s night”? That “night of sin” present out there in the world also settles down over the school, over little circles of friends, and over the parental home right down to the blankets on the childrens’ beds.

But then there are also parents that “keep watch at night” even over some flock beyond their own door. These are the ones that have it really busy! Sometimes they have to leave their flock in the hands of another care-giver. God’s ordinances stood on their head! Keeping watch at night, to be sure, but not directly over their own flock.

Can there be peace in such an arrangement?

Will the heavens open for us then?

Think about this. If the shepherds in Ephrata’s fields had not been faithfully involved in keeping watch over their flock, they would have seen nothing of that night’s brilliance, witnessed nothing of the Lord’s glory shining around them, heard no angel song, and would never have paid homage to God’s Holy Child.

In the name of the Lord, may these things be true for you, brothers and sisters—for the sake of your children and for the sake of your own souls. But you will never experience these blessed events, and the heavens will never open for you, unless the Holy Spirit testifies about you as well, “Also these shepherds kept watch over their flock at night!”

This meditation, translated by James A. De Jong, appears courtesy of the Dutch Reformed Translation Society. Acton Institute is also a partner in publishing the Abraham Kuyper Collected Works in Public Theology.