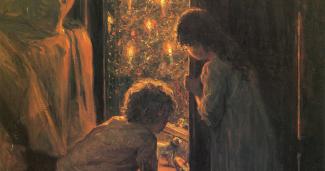 On Christmas morning, millions of children all over the world will race downstairs to open presents in eager anticipation. Savvy parents will sometimes wait to put gifts under the tree until Christmas Eve, as curiosity often gets the best of kids in the days leading up to Christmas morning. But even without the physical gifts under the tree as a constant visual reminder of the impending joy of opening gifts, children’s minds are often preoccupied with the prospects of toys and games in the weeks leading up to Christmas.

Human beings would give in to their basest material and physical urges from moment to moment. Violence would be endemic. A world that elevates instant gratification to the highest good would very much resemble a Hobbesian state of nature, in which life is nasty, brutish, and short. The pleasures that would be had in such a fleeting existence would be those of pure hedonism: eating, drinking, and making merry. As the apostle Paul puts it, “their god is their stomach” (Philippians 3:19).

Indeed, there is a close connection between delayed gratification and civilization. The character Bean in Orson Scott Card’s novel Ender’s Shadow sums it up nicely: “Isn’t that what it means to be civilized? That you can wait to get what you want?” Lester DeKoster provides important insight into this connection in his study of the nature of work in Christian perspective. In DeKoster’s account, those of us in the civilized world go to work every day to create things that we ourselves will not consume in order to contribute through our work to the web of social relations we call society. We work to create goods and provide services for others, delaying our own gratifications to do so. We receive paychecks as a token of our contributions to civilization, representing our own claims on the goods and services of others.

This principle of delayed gratification, or of what also might be called asceticism or self-denial, is in fact the basis of civilized, as opposed to barbaric, society. This is why thinkers like Lord Acton and Edmund Burke have connected restraint of our appetites with flourishing social life. As Acton wrote, “self-preservation and self-denial” form the twin bases “of all political economy.” Similarly, observed Burke, “Society cannot exist unless a controlling power upon will and appetite be placed somewhere, and the less of it there is within, the more there must be without.”

Children on Christmas morning in most cases have not matured or been civilized to the extent that they can restrain their own appetites. The parents must act as the civilizing influence. This is why the danger of consumerist materialism is so significant, both spiritually as well as socially. When the adults have no self-restraint, how are the children to be properly socialized?

Increasingly our developed world is becoming governed by the principle of instant rather than delayed gratification. The dominance of instant gratification, and the corresponding decline into barbarism, can be observed most keenly in our consumption habits. As Irwin M. Stelzer characterized the current state of affairs in retail sales recently, “Anyone attempting to survive in that hurly-burly has to deliver instant gratification, free of delivery charge, at prices that reflect ever-thinner profit margins.” A society that sows the gratification of its material desires everywhere and always, without limitations of rest or Sabbath, will reap a harvest of barbaric sensualism.

The apostle Peter warns about following the “sensuality” or the “depraved conduct” of false teachers (2 Peter 2:2). This sensuality is connected with “greed” (v. 3), and it is an orientation leading to destruction, both for individuals as well as for societies. Far from denying or undercutting social life, then, Jesus’ warning that “life does not consist in an abundance of possessions” (Luke 12:15) actually provides the basis for civilization.

On this account, civilization arises from the proper ordering of our desires. This means neither denying the good gifts that God has provided for us, including our material possessions, nor absolutizing the demands of our bodily appetites. From the Christian perspective, as Augustine put it in his reflections on the divine civilization, our earthly goods must be rightly oriented to God, the supreme good: “For man has been so made that it is to his advantage to be subject to God, and harmful to him to act according to his own will rather than that of his Creator.”

There is perhaps no better illustration of this contrast between earthly and heavenly gratification than the Advent season, when we wait in eager anticipation of the birth of our savior, Jesus Christ. We see a heavenly form of waiting in the picture of delayed gratification in the case of Simeon, a man who was “righteous and devout, waiting for the consolation of Israel, and the Holy Spirit was upon him” (Luke 2:25) Likewise Luke tells of the prophetess Anna, who at the presentation of the baby Jesus at the temple, “began to give thanks to God and to speak of him to all who were waiting for the redemption of Jerusalem” (2:38).

Christmas morning is a perfect opportunity to reflect on what desires we seek to gratify, what it is that we wait for in eager anticipation. It is a wonderful chance, amid the wrapping paper and presents, to understand more meaningfully the one true gift that all these other gifts merely reflect in their own limited ways: the birth of Jesus Christ.